The World Handwashing Day is a campaign to motivate the people to improve their handwashing habits. This is an important intiative to mobilize people around the world for neatness, by washing their hands with soap at critical moments throughout the day. It takes place on 15th October of every year. The campaign is dedicated to increase awareness of handwashing with soap as a key approach to disease prevention. The 1st Global Handwashing Day celebrated on 15th october 2008.

It is important to include handwashing practice into a regular habit. According to the official details, turning hand washing with soap before eating and after using the toilet into an ingrained habit was projected to save more lives. Sanitation and hygiene are important factors for Decrease in the Viral Diseases in India.

This Activity is mainly promoted for Children. But, it is to be followed by the everyone of all age group of people. In India in 2008, Cricket legend Sachin Tendulkar and his teammates joined an estimated 100 million school children around the country in promoting up the campaign for better health and hygiene as part of the 1st Global Handwashing Day. 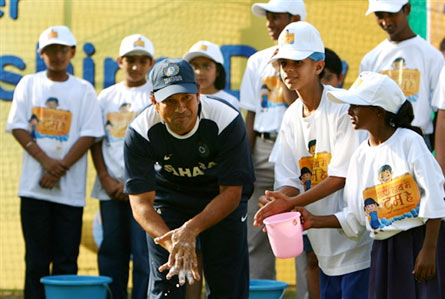 The focus for Global Handwashing Day’s inaugural year in 2008 was school children.  The campaign was initiated to reduce childhood mortality rates related respiratory and diarrheal diseases by introducing simple behavioral changes, such as handwashing with soap. Peer (friend) influence is significant to increased handwashing among students of all age groups. The Sanitation is important in village for daily activity.

The Participating members countries pledged to get the maximum number of school children handwashing with soap in more than 70 countries and their Hundreds of Cities.

Subscribe with us for all latest educational News and Results In India.

Praveen is a Dynamic Writer on educational topics with an experience of more than 5 years. His Blogging for education news, science & technology niche is Remarkable. He is a G.K expert, Book reader & a sports fanatic by nature.
Follow Him @